A note from The Trustees of MpBC Global Alliance, Inc.: It is with great sadness that we announce the passing of Terri-Louise Frnka. Terri was working on this message when she passed, and wanted to make sure that we published her story. The most disturbing lesson here is the numbers diagnosed in the 30 to 39 age range. Women in this range are barely on the radar for Breast Cancer and many are misdiagnosed with mastitis if they are breast feeding. Please honor Terri by reading about this courageous young woman, wife, and mother.

We all think we know about breast cancer awareness until it happens to us. When you have breast cancer you learn soo much that isn’t vocalised. For example before I just assumed it was under one umbrella. Little did I know there was triple positive, triple negative, ER/PR+ Her2-, ER/PR- Her2+ and whatever other combinations. Of course you never see that in the ads during breast cancer month.

We have the pink ribbon campaign, however there is no real true awareness brought to the table. It’s all pink washing. Research is sooo desperately needed. Women and men both can get breast cancer. However you don’t see that during the month of October. Im not writing this to shame the pink washing campaigns exactly. But I feel the need to truly raise awareness on the cold reality of breast cancer.

My name is Terri-Louise, I was diagnosed October 6, 2016 with invasive ducal carcinoma. While originally I was first diagnosed stage 2b, after my surgery that changed to stage 3a.

Before I got diagnosed I was starting to wean my daughter off breast milk. I was having so much trouble with it at that time, when I first found the lump I assumed it was mastitis. Because surely it wasn’t cancer because I was breastfeeding there was no way I could have breast cancer right? Wrong, one of the lies women are told to shame them into breastfeeding.

Breast cancer can happen to ANYONE at any age or any gender. It doesn’t discriminate at all. You could be transgender, male or female. It simply doesn’t care. It just happens. While breastfeeding or being a male can lower your chance it still can happen.

My daughter was almost eleven months old when I originally found the lump. I blew it off, not only that the nurse I spoke to when I asked if there was something more I could do if it was mastitis. Her response was suck it up and massage it harder. Of course she felt like shit after she found out I had cancer. I also had to fight to get my mammogram, thankfully I didn’t have to go in first to get it like they wanted me to.

Long story short I started chemo October 17th on my youngest sisters birthday, I had four rounds of A/C chemo aka the red devil as we call it. I had it every two weeks, after that I had twelve rounds of taxol every week. While I waited a month my tumour grew rapidly. After I had surgery on April 17th, I learned I had a very very rare type of breast cancer. Called Metaplastic breast cancer, only less than 1% of all the diagnosed breast cancers turn out to be Metaplastic. And typically they are triple negative, but not me I was ER/PR+, so I was even more rare! Hooray for me!

I then had radiation let me tell you I rather do chemo then radiation any day of the week. Why you ask? I was burnt pretty badly my skin was destroyed. Imagine being burnt badly and ripping that skin off and getting burnt again. And then repeat that 3 more times. So yeah radiation suuuucked. Not to mention because of how badly I was burnt, I lost my expander. The skin was too thin and there was no saving it after getting cellulitis twice.

I lost my expander on December 4th, after previously being in immense pain. If they could bottle that pain up I’m almost positive if someone wanted to torture someone that was the way to go. Try to imagine all the different types of pain all at once. It burned, throbbed, stabbing, twisting and whatever type of pain. I was miserable. Everyone wanted to blame the other. Only doctor I couldn’t get into was my plastic surgeon because of the front desk lady she was he’s completely booked. I finally caved and went to the ER and he was called. I had an appointment the next day to see him. He was yeah it needs to be removed like yesterday. In my head I was no shot Sherlock.

Here I thought I was still in remission twelve days after surgery I had my CT Scan. The scan was typical routine scan. We didn’t expect the dreaded news I received, it seemed as if my cancer had indeed returned. Not the news I had wanted to hear six days before Christmas. Merry Christmas your cancer has returned to your lungs and sternum. They scheduled a biopsy of my lung, the weekend before my biopsy I felt ANOTHER lump. My thoughts were fuck. It literally was right before my biopsy. I called asked for them to biopsy my lymph node too. I got two biopsy’s that day.

So a week later Jan 9th I was informed that my cancer indeed had returned and now I was stage 4. Since I had my hysterectomy on Sept 14th, my cancer now was Triple Negative, but still was Metaplastic, hooray for me!! Not. I was also told after my husband and I asked, worse case I had 6 months to a year. I don’t know if that was with treatment or if that was with out. But my doctor said there is a lot of things they can try to prolong my life if they can. We just gotta find what works for me. The DAE trial/regiment, has a 40% success rate.

So let me explain something more about Metaplastic breast cancer, again it is really rare less than 1% of women have it. So far as of now we don’t know of any men that have it. The thing is the cells in metaplastic aren’t your a typical breastfeeding cancer cells. Depending on the type of metaplastic breast cancer you have it could have cells you see in lung cancer, or skin cancer. The tumour is always misshaped. My first tumour looked like a jelly bean at first then turned into a pyramid. Not only that it grows rapidly and a lot of the time is chemo resistant. Both times I did chemo my tumour barely responded.

I started chemo this time on Jan 18th and had three rounds of the DAE regiment. Not long after I started I felt a pimple on my head, it was near the end of Jan. I thought it was a pimple or ingrown hair. But it started to grow, around the second round of chemo it had grown more. So they biopsies it, and yet again cancer same type. sighs I finally got it removed on March 8th. It had grown from the size of a pimple from the end of January, to two and half inches on March 8th. It was very rapid. I was taken off the DAE drug regiment on April 3rd. The treatment wasn’t working. So here I am scared to death because the DAE trial isn’t working.

At this point I’m scared for my little girl, my oncologist made an appointment to see a drug trial doctor. I don’t know what trials they have for me. I’m trying to remain positive. Which I’ve been trying to do this whole time since day one. My little girl needs her mama. It’s why I made my Facebook page.

So I met with the doctor, he suggests the DART trial which is in phase two I believe. It’s Immunotherapy if two drugs, and much to my relief I actually get the drugs. I was scared it would be a blind study. April 19th I started the trial, I get one drug every two weeks and the other every six weeks.

So far some days the tumour in my armpit I swear it’s shrinking while other days I swear it’s growing. All I know is I’m fighting for my life and hoping each day I live long enough to see my little girl graduate. High school and get married. Those are my goals. If I live long enough for her to remember me and how much I love her.

If you truly want to help fight breast cancer donate to metavivor.org, bcrf.org, or mpbcalliance.org . We need your help if we are going to find a cure for us. Please always think twice before you donate. 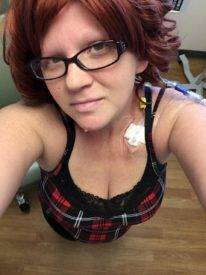 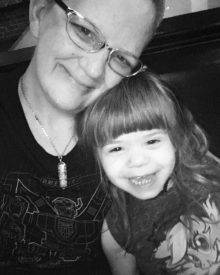 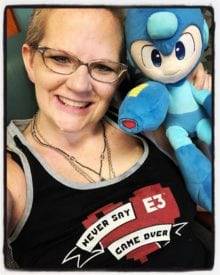 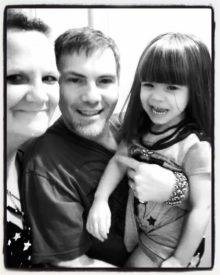